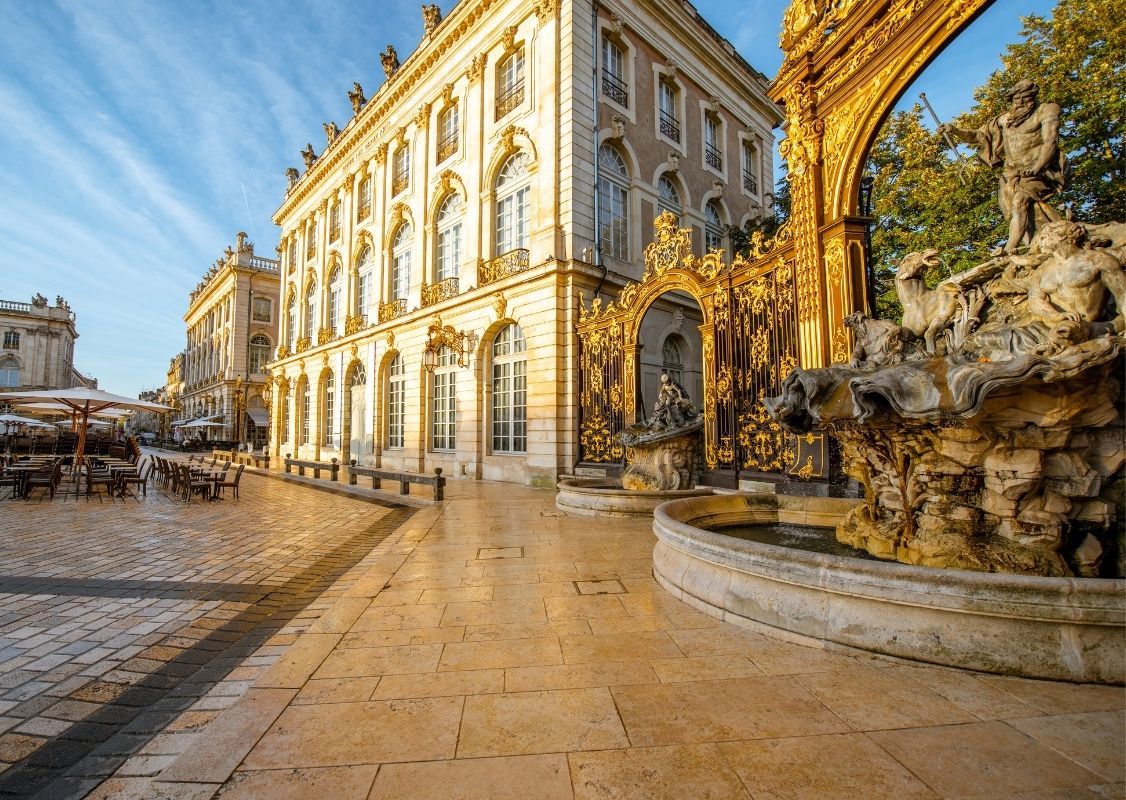 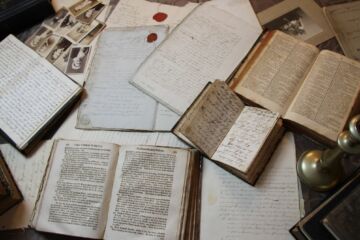 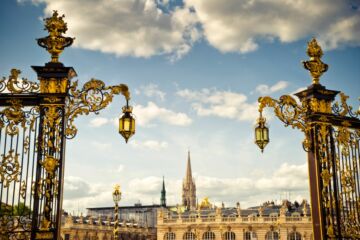 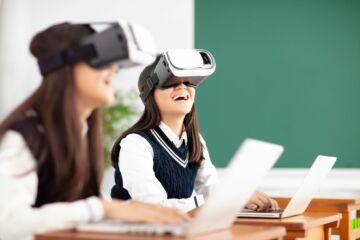 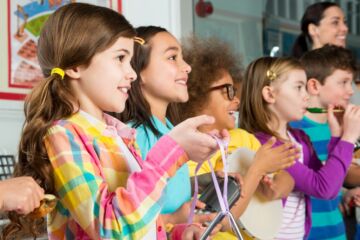 The capital of a duchy that was not attached to France until the middle of the 18th century, Nancy has always had an eventful history, which is what makes it interesting today.

Its originality is based essentially on the three towns that make it up, each of which has its own remarkable heritage: the Old Town, which houses the Lorraine Historical Museum, the Chapelle des Cordeliers and numerous Renaissance town houses, the New Town of Charles III and, of course, the Royal Town of Stanislas, an architectural ensemble consisting of the Place Stanislas, the Carrière and the Alliance, for which Nancy is a UNESCO World Heritage Site.

A century later, the artists of the Nancy School, such as Gallé, Daum, Majorelle, Prouvé and Vallin, gave France its first modern decorative arts movement.

Today, it is renowned for its large number of historical monuments, its numerous fortified gates that were once part of the ramparts surrounding the medieval city, and for its three squares that are classified as UNESCO World Heritage Sites, notably its Place Stanislas, named after the last Duke of Lorraine, Stanislas Leszczynski.

Nancy is also one of France’s leading university cities thanks to its numerous faculties, its ARTEM university campus and its nine engineering schools of the University of Lorraine (in the top 300 of the Shanghai ranking).

Things to Do Around Nancy

Designed by Stanislas to honour his son-in-law, Louis XV, it is the jewel in the crown of the city! Did you know that it measures 106 x 124 metres?

The Town Hall runs along its entire length to the south, while the four pavilions house the Opera, the Grand Hôtel de la Reine and the Fine Arts Museum. To the north are the Basses Faces (the single-storey pavilions). Its classical architecture is enhanced by Jean Lamour’s golden grilles and rocaille fountains. Have fun finding all the symbols of royalty on the gates or spot the moods of the 100 masks

To prolong the moment and take a royal break, why not sit on the terraces or on the lices that border the square?

From the Place Stanislas, the Musée des Beaux-Arts is one of the beacons of Nancy’s cultural life. The museum presents the greatest names in European art history: Perugino, Caravaggio, Rubens and Delacroix. Its collections are particularly rich for the 20th century, with notably the glassworks of the Daum collection, exhibited in the setting of the former fortifications of Nancy, or the space devoted to the builder Jean Prouvé.

3) Museum of the Ecole de Nancy

The Musée de l’École de Nancy is one of the few French museums dedicated to an artistic movement: Nancy Art Nouveau. In the heart of the Nancy Thermal district, the museum is located in the former property of an important collector of the École de Nancy, Eugène Corbin.

In the atmosphere of a private house from the Belle Époque, the museum presents its exceptional collection of decorative art by Nancy artists Gallé, Majorelle, Prouvé, Vallin, Daum and Gruber. With nature as their main inspiration, they all participated in the birth of a school of international renown that was part of the “Art Nouveau” movement.

The Basilica of Saint Epvre was built in the 19th century by Prosper Morey, architect and winner of the Prix de Rome, in the neo-Gothic style. The work was carried out between 1864 and 1871 by numerous European workshops: glasswork in Austria and Metz, woodwork in Bavaria, bells cast in Budapest in particular. There are no set times for access to the interior of the building.

The Villa Majorelle, also known as the Villa Jika, is a mansion built between 1901 and 1902 in Nancy in the École de Nancy style, formerly owned by Louis Majorelle. It is an architectural masterpiece, typical of French Art Nouveau.

The Cathedral of Notre-Dame-de-l’Annonciation et Saint-Sigisbert in Nancy is a Roman Catholic cathedral located in Place Monseigneur-Ruch in Nancy, in the Meurthe-et-Moselle department of the Lorraine region. It also has the status of a primatial church and a minor basilica.

The cathedral has been classified as a historical monument since 9 August 1906.

8) The Old Town of Nancy

The old town of Nancy is arranged around the Ducal Palace. It developed in the shadow of the Saint-Epvre church. Following initiatives to rehabilitate the old quarter, the old town is one of the must-see sites in Nancy.

From the Porte de la Citadelle in the north to Place Vaudémont in the south, the district contains four notable monuments: the Porte de la Craffe, the Cordeliers church, the Ducal Palace and the Saint-Epvre basilica. It also has many private mansions. The old town is a bit like the “Marais de Nancy”, a reference to the famous district of Paris, with its beautiful houses, its cafés, its shops… this village-like atmosphere in which tourists, students, revellers and culture lovers stroll.

9) The House of the Macaron Sisters

Located in the heart of Nancy, the Maison des Sœurs Macarons, run by pastry chef Nicolas Génot, is the only confectionery to hold the secret and coveted recipe of the real Nancy macaroons. This delicate confection, a mixture of egg white, sugar and almonds from Provence, is inherited from the community of sisters of the Benedictine Ladies of the Blessed Sacrament: the macaroon sisters.

The Livre sur la Place fair in Nancy is the first national fair for the new literary season. It takes place at the beginning of September on the Place de la Carrière, a few steps from the famous Place Stanislas in Nancy.

Each year, the Nancy literary fair – Le Livre sur la Place, sponsored by the Académie Goncourt, welcomes hundreds of contemporary authors and thousands of book lovers. Le Livre sur la Place has been a popular meeting place for writers, booksellers and the public since 1979.

Installed under a marquee on the Place de la Carrière in Nancy, the guests sign books and exchange with the public. At the same time, exhibitions, debates, interviews and other cultural events complete the Nancy event.

In 2023, Nancy will have the pleasure of inaugurating the only aquatic and thermal establishment in France located in the heart of the city. Adjacent to the Parc Sainte-Marie, a veritable green setting, a stone’s throw from the École de Nancy museum and the Artem campus, the establishment will offer a varied range of activities for all, in an exceptional environment. The architectural project for the site will take care of Louis Lanternier’s work and will not seek to duplicate the historic building, but to complete it with boldness and respect for the existing heritage.

Trees surrounding Stanislas, flowers on the paving stones, islands of greenery, original wooden creations, deckchairs or benches to rest on, the Place Stanislas is transformed into a haven of greenery during the Jardin Ephémère.

Every year, the Parks and Gardens Department designs a new creation based on a theme linked to current events and unveiled at the beginning of the summer: travel, history, heritage, twinned towns, science, etc. In September, after several months of work, the result is unveiled to the delight of the public.

Designed with sustainability in mind, using recycled materials and plants that will later adorn other green spaces, the ephemeral garden is also a beautiful showcase for the preservation of biodiversity. A beautiful tribute to the botanical tradition of Nancy which inspired the artists of the Ecole de Nancy.

Located in the heart of the historic centre, the Pépinière Park (often called the Pep’ by the people of Nancy) offers a real haven of greenery with its 21 hectares of wooded areas and its magnificent rose garden.

A former royal nursery founded by Stanislas on the site of the former ducal gardens and bastions of the Old Town, it was transformed into a public park in 1835 while retaining its original layout.

It is a paradise for walkers, joggers, pushchairs, children and students, a breath of fresh air for city dwellers and an essential green break!

At the end of the afternoon on Saturday, the great Saint Nicolas parade is a magical moment with its floats imagined and decorated by the communes of the Metropole du Grand Nancy and its fantastic creatures.

Like many eastern cities in France and Germany, Nancy has its own Christmas markets, known here as St Nicholas villages, which contribute greatly to the special magical atmosphere of Christmas in the east.

During the Saint Nicholas festivities, several markets are set up throughout the city with their wooden chalets decorated with glittering garlands: the large Saint Nicholas village on Place Charles III, the gourmet Saint Nicholas village on Place Vaudémont near the Ferris wheel and the artists’ hamlet on Place des Bourgets. Each with its own atmosphere, they invite you to stroll through their alleys to find an original gift idea, share a good mulled wine and savour a gingerbread, take a ride on the merry-go-round or on the ice rink.

It is perhaps its geographical location that has made Lorraine what it is today. Located on the borders of France, Germany, Luxembourg and Belgium, it is a land of passage, of invasions as others would say.

Wars, of course, have left a lasting mark on it, as has industry.

But on the other hand, it has so much to offer! History, architecture, nature (yes, yes, forests, mountains, hiking trails, …), art (Ligier Richier, Georges de la Tour, Daum, Gallé, …), gastronomy made of sweets (madeleines, macaroons, Vosges sweets, …), shows, exhibitions, culture, and so many other wonders!

Lorraine is really a tourist region to discover through its four departments: Meurthe-et-Moselle, Meuse, Moselle, and Vosges.

1) On the trail of the First World War in Verdun

Verdun is a small town in north-eastern France, on the banks of the Meuse River. It is known as the site of the Battle of Verdun, which took place during the First World War. The battlefields of Verdun are marked by museums and memorials, such as the Douaumont Ossuary, which houses the remains of over 100,000 soldiers. To the northwest of the city is the Meuse-Argonne American Cemetery. In the town, the huge Chaussée Gate was once part of the medieval wall.

In the heart of the great natural spaces, forests, crests and valleys, hiking plays its most beautiful part here, on foot, by bike, on horseback… the lakes which in the summer season vibrate to the rhythm of a multitude of water sports activities, the spa towns which keep the imprint of Napoleon III and his wife Eugénie De Montijo, the magnificent family ski resorts, the beautiful tables of the farm inns, the great secrets of the Epinal imagery… In the Vosges, which offers itself without counting the cost, happiness is always on the agenda!

There are more than 30 lakes and ponds in Lorraine, each with its own fauna, flora and activities.

The Gérardmer Lake, located at an altitude of 660m, is a lake of glacial origin. It is also the largest natural lake in the Vosges with a surface area of 155ha.

Located at the foot of the Côtes de Meuse and in the heart of the Regional Nature Park, the Madine lake is an expanse of water of 1100 ha, 250 ha of forest and 42 km of shoreline.

A few kilometres from Baccarat, the city of crystal, the Pierre-Percée lake is one of the most exotic. Wild and mysterious, it is nestled between the fir trees and its maple leaf shape evokes the Canadian landscape.

At the foot of the castle bearing the same name, the Waldeck pond is one of the exceptional sites classified as a Nature Reserve. It is a pond that can be seen all year round from the dike. Because of the fragility of its fauna and flora, it is not possible to walk around it. It is a sensitive natural area to be respected and preserved.

About the Training Centre in Nancy

Further information on our academy will be provided after the confirmation of the course. 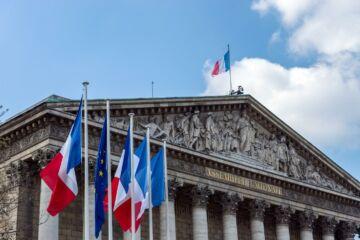 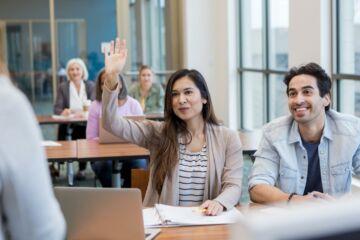 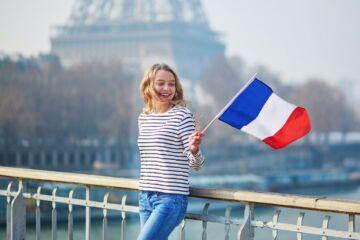 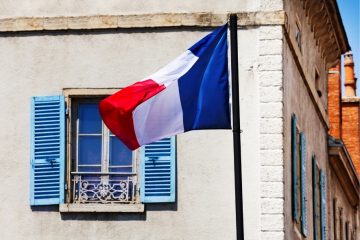